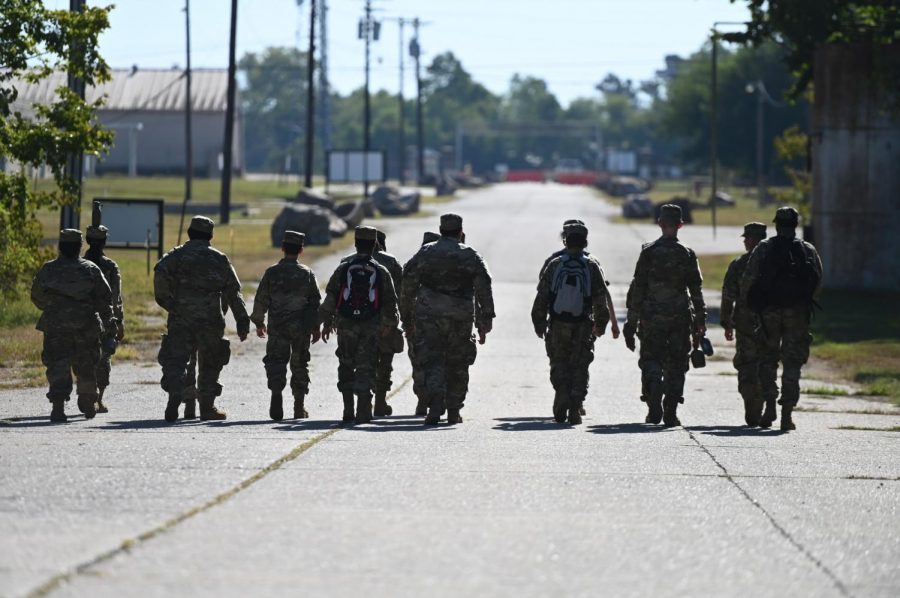 JROTC students walk towards their next destination during the afternoon to get started on their next activity of the day. Talon Photo by Jesus Serrano

With a rope gently sagging from one side of a creek bed to the other about 10 feet above the ground, Cadet Private Charli Warren tried not to think about how much trust she was putting into the one rope, much less her fellow cadets. Halfway through, she felt like she couldn’t go any further.

About to accept defeat, she heard her platoon starting to cheer her on. She knew she could not disappoint them so she pushed her burning legs forward as the cheering grew louder. When she hit a tree trunk, she exhaled in relief knowing she has reached the end as her platoon cheered even louder.

“It was a lot of pressure but my platoon was really supportive,” Cadet Charli Warren said.

At the beginning of the year, the Junior Reserve Officer Training Corps (JROTC) took a two-day trip to Camp Maxey doing different types of activities that help them build their confidence while working as a team.

“It was a leadership camp, to put the cadets in a situation that would challenge them and give them leadership opportunities and to be able to lead their peers,” First Sargent Venson Herron said.

From scavenger hunts to obstacle courses, each activity served a specific purpose.

“Every activity given had an underlying learning experience that someday might help them in the future,” Herron said.

The obstacle course included rope climbing, rolling logs, balance beams, and much more which Herron said was a confidence course to get them over their fears.

“There was a rolling log where it rolls towards you and you have to jump over it, but it is rolling there is a chance it may roll you back off, so that was a bit scary,” Warren said.

The scavenger hunt was a competition between two different teams to see who could reach the same goal first.

Through all these activities, Herron said he wanted them to see the importance of teamwork, build confidence for themselves, and gain more leadership.

“Honestly, I am pretty content in what has happened in the last couple of days,” said Battalion Commander/Lieutenant Colonel Daniel Bocanegra.