Homecoming Queen Leaves Before Halftime Ceremony Due to Contact Tracing 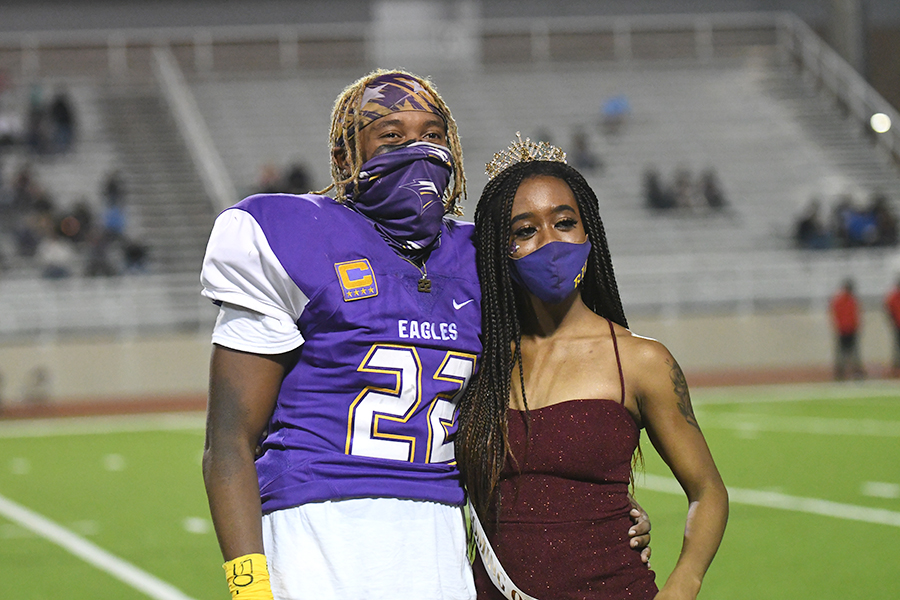 As tears streaked through her makeup and down her cheek, senior Mya Johnson’s dress twinkled under the stadium lights as she sat in her mom’s car during homecoming halftime festivities.

She was able to see other members of the homecoming court on the field and hear the announcer’s voice ricocheting off the stadium and school building as her name was announced as Homecoming Queen. Her phone immediately blew up with friends and fellow cheerleaders congratulating her.

“The overwhelming amount of love I felt from that distance was amazing,” Johnson said.

Not long before, as pre-game activities and player warmups buzzed throughout the stadium, Johnson stood on the track mingling with fellow court members when she got a call from her mom. She was told that she needed to leave the field immediately and quarantine after contact tracing revealed she had been in close contact with a positive Covid-19 case.

Johnson said she wanted to control her emotions, but she realized right away there was no use trying.

“I don’t want to cry in front of people, but I just lost it,” Johnson said. “I was sitting there bawling my eyes out.”

When RISD Superintendent Jeannie Stone heard what happened, she immediately headed to the parking lot to track down Johnson and congratulate her.

“I was just so sad for her. I wanted to go out and tell her family that I was sorry that it had happened and see if there was anything we could do,” Stone said. “Their family’s first priority was keeping everybody safe, and that say’s a lot about them.”

Johnson said it was nice that Dr. Stone reinforced to her that she did the right thing by leaving the stadium.

“To see her congratulate me and the responsibility I demonstrated, that felt really personal, and I can’t thank her enough,” she said.

Senior Chloe Rosenthal, a friend of Mya’s for more than 12 years, called her after she had to leave the field and predicted she would be crowned, and that it would be an amazing adventure for her to be named homecoming queen.

“She totally deserved it,” Rosenthal said. I knew she would get it – I voted for her, so many others voted for her too.”

Johnson’s family was caught between happiness and frustration with what the pandemic has taken away from so many people.

“It was yet another reminder of how Covid has changed the lives of so many in personal and monumental ways,” said Aisha Huckleberry, Mya’s mother.

When the Johnson’s heard that Marcellus Dennis won king, they died laughing. Mya and Marcellus dated in junior high and they swore if they were both single senior year they would run for prom king and queen together.

Mya posted herself on Instagram in her sash and crown, and a video when she heard the announcement.

In her caption, she said “Thank you, thank you, thank you! Please remember to wear your masks at all times, and follow CDC guidelines, and if you are feeling the slightest bit off, STAY HOME, it’s not worth it. Much love always, xoxo!”

Having the opportunity to lead in a positive manner when negative things were happening was something that Johnson said made the whole situation a little more bearable, and she thrives in those moments.

“It was very disappointing, but the overwhelming amount of love I’ve gotten from my friends and my peers makes it feel good to be able to lead something,” Johnson said. “I cried and I cried all night, but it was 100 percent worth it.”

Stone said she hopes this can be a moment where others follow Johnson’s lead, and take precautions that reduce risk.

“Even though there can be a disappointment, there’s a lot more to be happy about that we’re all safe and together,” Stone said.

After her quarantine, Mya was crowned by Marcellus at halftime during the game against Irving MacArthur.