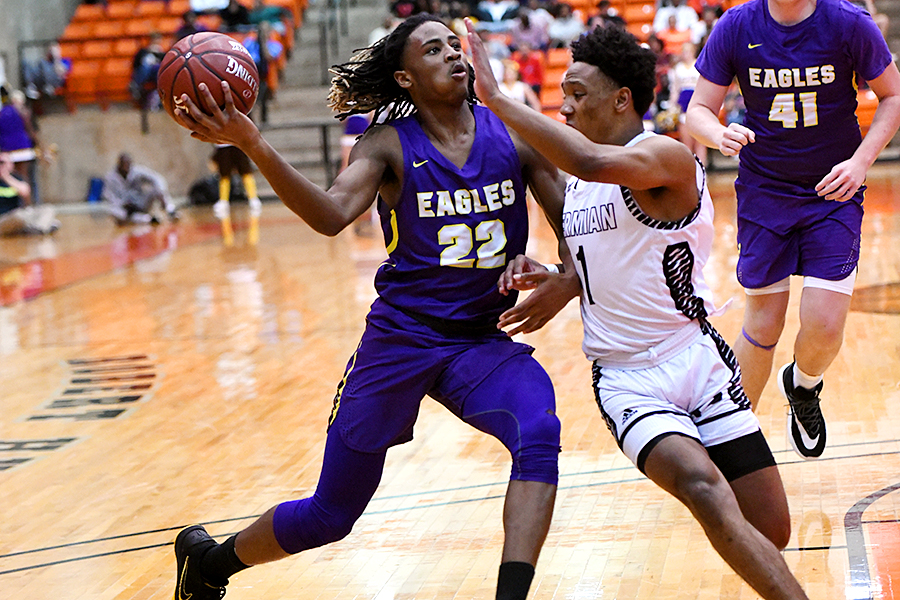 Sophomore guard Cason Wallace slashes to the basket during first half action. The Eagles lost to a Permian team who was on fire from three and were able to hold Richardson's two top scorers to a combined 22 points. Photo by Leila Saidane

When the entire the Richardson student section rushed the floor after beating number one Duncanville, the team knew what they were capable of. They then proved it by making it to the regional tournament for the first time in 33 years.

They lost to a Permian team who was on fire from three and were able to hold Richardson’s two top scorers to a combined 22 points.

The Eagles started slow trailing 27-15 at the half, and they were never able to recover.

“We didn’t make our shots early,” head coach Kevin Lawson said. “We had to come trap and create more possessions for ourselves which would give us a chance at a comeback, but they hit big shots.”

When the team went 3-2 in a tournament in Houston, coaches said the players started to buy in.

“We went to the Prosper tournament, played some really good basketball and that’s when things started coming together,” Lawson said.

The team was led by their star sophomore back court Cason Wallace and Rylan Griffen who were thrust into leadership roles.

“Coaches put the ball in my hands and trusted me to score,” Griffen said.

The most important non playoff game of the season was on Valentines day when Richardson defeated Duncanville 81-77 in overtime.

“Nobody believed we would beat Duncanville,” senior forward Jamille Barnett said. “Doing it on our home floor, and having everyone excited that we beat them, was an amazing moment.”

Players said there was a better sense of team camaraderie compared to past teams.

“That’s what made us different from other teams,” Barnett said. “We played for each other instead of individual stats.

The team is returning most of their scorers, and said they believe that the best is yet to come.

“We’re definitely winning state next year,” Wallace said. “We’re going to be better than this year.