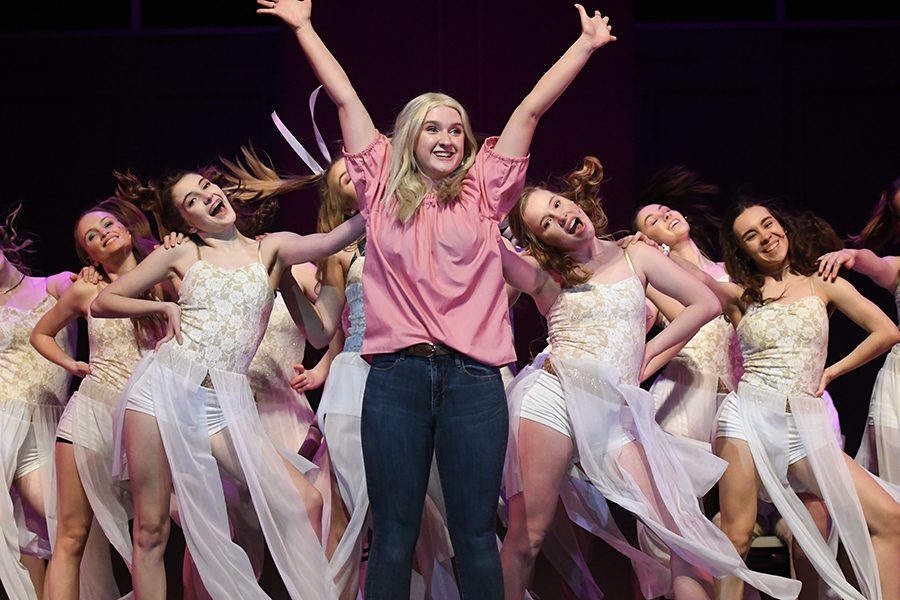 Senior Morgan Peterson throws her hands up in the number "So much Better" as the chorus bounces back and forth behind her. Talon photo by Daphne Lynd

With the roaring applause dying down, director Erik Archilla walked onto the auditorium stage, flowers in hand, to congratulate the seniors of his first-ever musical.

The Theatre Magnet chose Legally Blonde, a musical that has a strong message about women empowerment, as their spring play along with a new director. This is Archilla’s first year as musical director, and he said he’s taking it on with all that he’s got.

“Ulcer, pain, almost heart palpitation, but good,” director Erik Archilla said, describing his experience as a first-time director. “The kids are awesome, and I have an amazing team with Ms. Perez, Mr. Marquez and Ms. Moore. They’ve been fantastic throughout this, and my tech team of Covington and Suggit, they’ve all been fantastic to work with. It’s been cool to have such talent in our school, and it’s been one big group effort.”

Not only is it new for Archilla, it’s also new for all returning staff and actors after having Cliff McClelland as a director of the musicals for the last 20 years.

“Archilla has been very organized and very on top of things,” Choir director Lindy Perez said. “He’s very clear on what he expects, when he wants everyone to be there, and what he wants done. He’s very prepared when it comes to rehearsal so he’s not wasting anyone’s time, and everyone’s really appreciated the organizational aspect that he’s brought.”

Senior Morgan Peterson has been doing musicals for four years now, with McClelland as her musical director for the last three years. This is Morgan’s first year as a lead, and her first year with a new director.