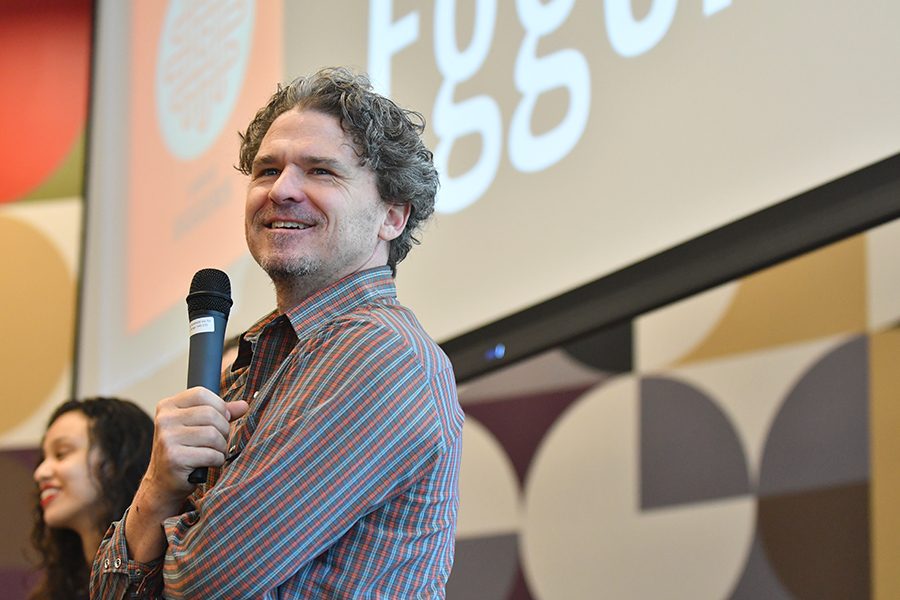 Author Dave Eggers debates the pros and cons of techonogly with the student filled crowd. Photo by Chad Byrd

Author Dave Eggers’ smirked at senior Wilmer Mejia Maldonado when he asked if he had a phone, then brandished a flip phone over his head like a trophy while the student body erupted into laughter and applause.

Eggers, whose book “The Circle” deals with issues surrounding technology, was selected for Richardson Reads, an annual event for staff, students, and the community to read a book chosen by a committee of librarians.

“We promote discussions all over the community, said Vice President of Richardson Reads Librarian Janet Vance. “We encourage book clubs to add it to their roster. It’s a year-long reading and discussing of the book.”

Vance described the discussion that unfolded as one of the grand events of the year at Richardson High School with AP English seniors and juniors attending the event that Eggers said he hoped would be a free-flowing conversation.

Junior Jessamine Kraemer cocked her head curiously as the author talked about the theme of the book companies having too much power and control over everyday people through technology.

“So, why is a company’s violations of others privacy bad? Why does that have to be inherently bad?” Kraemer asked.

The most expensive Richardson Reads author, who was paid $25,000 for a visit that lasted less than twenty-four hours, repeated her question and laughed. He told her that was the whole point of the book was to ask questions like that, and she got it perfectly.

The main thing is we try to find a book that has relevant issues.” Vance said. “I think we succeeded this year, its pretty impossible to find the perfect book,” Vance said.