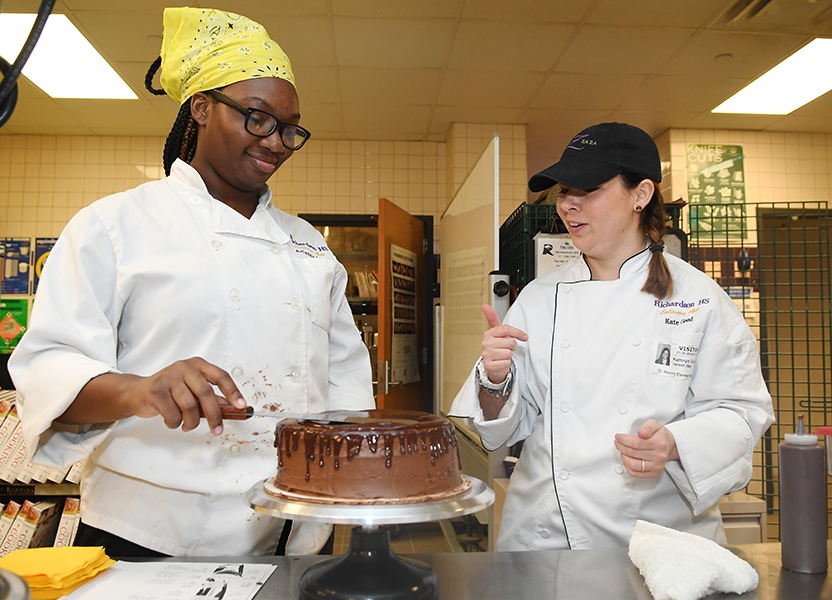 Good is working to bring a new vision to the culinary magnet including an on-campus restaurant and more hands-on experiences for her culinary students. "Its been very exciting, a little crazy and overwhelming, but overall, really good," she said. "This environment is a lot different than your normal classroom. There's a lot of learning by doing. Sometimes we fail, and that's how we learn."

Pots and pans clatter as students dressed in white bustle around the kitchen. Amid the sound of chatter and the buzz of appliances, new culinary teacher Kathryn Good helps a student ice a chocolate cake.

Good is working to bring a new vision to the culinary magnet including an on-campus restaurant and more hands-on experiences for her culinary students.

“It’s been very exciting, a little crazy and overwhelming, but overall, really good,” she said. “This environment is a lot different than your normal classroom. There’s a lot of learning by doing. Sometimes we fail, and that’s how we learn.”

Good’s students have the ability to develop culinary learning opportunities both inside and outside the classroom.

This year, Good and her students opened Bistro 15. Unlike the sandwiches and salads offered by previous cafes run by the culinary department, the new restaurant features southern-inspired food.

“We named it that because there were 15 students in the class, and we also have 15 items on our menu,” Good said. “We kept it open to more of a ‘from-the-table’ feel, versus a theme restaurant. My vision for them, for this restaurant, is to really learn how to make from scratch. And they do- everything they make is from scratch.”

Good’s students say they have the freedom to experiment while cooking, whether in the classroom experiencing new things like learning to make pasta or catering a complete enchilada event.

“This year, we learned how to make pasta, which in the other years we hadn’t had time to. We are experimenting [with] new things [for our restaurant] that people would like – now we have burgers, we have different salads, [and] we have shrimp and grits, which is a totally new thing that we didn’t expect people to like, [but] they like it so much [that] they order it a lot.”

“Another [goal] is to really challenge them, to get them out of their comfort zone and learn new skills that they would never do before, and to expose them to other mentors in the community,” Good said.

Besides new skills, the culinary students were also given more responsibility in the kitchen.

“This year, students have been in charge of getting all the ingredients, making lists, and personalizing the menu,” Patino said. “Not like last year, where it was all given to us. This year, we learned the business side of it. I’m actually going into the business side of culinary and trying to get my own restaurant in the future.”

Ultimately, Good says she wants to her students to apply these skills to a culinary career.

“By the end of the year, I would like to inspire my seniors, or maybe even my juniors, to go forward with this career,” Good said. “I’d love to inspire them to get out in the culinary world. That’s the goal.”